At Pattern Energy, we are serious about our commitment to supporting the communities where we operate.

Our team members live and work in the communities we serve, and from time to time, we like to feature a member of our Pattern Energy team and introduce them to our neighbors. The path to leading the team at Panhandle Wind was not a straight one, but interesting, nonetheless!

“That’s what I mean,” he continued.  “The team sees me, and they see someone who worked his way up, someone who earned it. My team knows that if there is work to be done, I won’t ask anyone to do what I won’t do myself. I get my hands dirty. I like to be the first on the field, and the last one off. That’s what leadership is to me. I’m here to show the team what’s possible in their careers, and to be a good example of leadership as we accomplish our goals.” 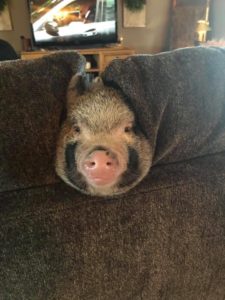 “We grew up on a ranch,” Jake told me on a sunny afternoon when I talked to him about his new role. “My dad had a farm, so my sister and I got a background in agriculture by nature of helping out as we grew up.”

Jake enjoyed learning about agriculture so much that he became an active participant in Future Farmers of America (FFA). In high school, he was one of a few that won the Texas Lonestar FFA Degree, the most prestigious award the FFA offers.

“It was like a college education,” Jake told me. “To qualify, we had to do many different projects around raising livestock. It was a lot—keeping receipts, showing a profit and loss, livestock judging, and a lot more,” he said. A girl and her pig.

After high school, Jake went off to college with a goal to one day teach agriculture, but while he was there, he realized it wasn’t quite what he was looking for and left to find his true calling.

He got a job working at a ranch, describing his work as “you know, cowboy stuff. I did everything there.”

Jake herded livestock on horseback, worked a handful of jobs that ranch life requires, and enjoyed the life.

In early 2015, after living the cowboy life for a while, Jake moved to Canyon, Texas, just south of Amarillo, and got a job working for Siemens in Vega, his first wind job.

By 2019, Jake was at Panhandle Wind, working for Siemens as a tech.

“My wife, Kelsey, and I had just bought a house when the position for the Assistant Facility Manager was open. For me, moving over to Pattern was a natural transition since we get along so well with Siemens and other companies.” 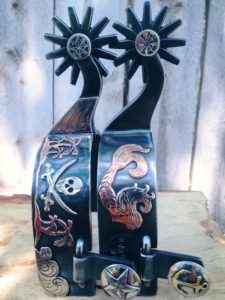 I asked Jake what he enjoyed about working for Pattern Energy, and at this question, he grew quiet and thoughtful.

“I’m not here to, ‘eight and skate,’” Jake said, referring to people who show up to work for eight hours, do the bare minimum, and then leave.

“You asked what I enjoy, and I like working with the crew,” he went on. “I worked my way up from wind technician, and Pattern Energy gave me the opportunity to advance my career and become a facility manager.

“That’s what I mean,” he continued. “The team sees me, and they see someone who worked his way up, someone who earned it. My team knows that if there is work to be done, I won’t ask anyone to do what I won’t do myself. I get my hands dirty. I like to be the first on the field and the last one off. That’s what leadership is to me. I’m here to show the team what’s possible in their careers and be a good example of leadership as we accomplish our goals.” Jake and his wife Kelsey have two daughters—Avereigh, 4, and Tenley, 11—plus five dogs alongside a tiny herd of goats and pigs.

“Outside of Avereigh and Tenley’s schedules, we do a lot with the animals, and we spend a lot of time outdoors,” he said.

Jake also does trap shooting, and the family loves where they live in Canyon, Texas. Buckle, made by Jake

Jake told me that Palo Duro Canyon is the place in Texas for custom-making spurs, bits, and bridles for horses.

“My dad bought me a pair of spurs when I graduated high school,” Jake told me. “I loved them and became interested in the crafting side of it. I wanted to make spurs in true Texas tradition, and that meant I had to learn from a master.”

In a classic tale as old as apprenticeship, Jake started hanging around an artisan’s shop when he wasn’t working, asking questions.

“After a while, he realized I was serious and started giving me tasks to do for him.”

Jake would work for the master spur maker for free, learning as he went. Eventually, he was ready to start making his own, and now creates custom spurs, belt buckles, bits and bridles, and even custom engraving on guns.

As you can see from the pictures, Jake does incredible work. The spurs you see were made and donated to Lubbock’s Women’s Protective Services, who auctioned them off at a fundraiser.

“I truly enjoy the engraving and artistry,” Jake says. “Seeing how much people enjoy my vision and work makes me happy.”

Looking into the future, Jake is optimistic. “My family is happy, and Pattern Energy is the most family-friendly company I have ever experienced,” he said. “I am proud of our work, providing energy for Texas, and I am proud of our team.”

As we neared the end of our time together, he finished with, “Life is good.”