“Ely isn’t a WIld West town anymore,” he said. “We have over a century of cinema and art helping build and blend our cultures here. It speaks to the type of people we have in our broader community that there is so much support for the arts. Everyone-” he paused as he said it, obviously proud, “everyone is getting involved.”

The Ely Film, Art, and Music Festival is taking place March 11-17 in Ely, Nevada. The main event weekend is March 11-13, with extended Nevada film showings through the 17th. (Read on for details!)

Shadrach Robertson is the new Chairman of the Festival this year, and he’s got big plans; he started with the name.

“This is the first year the Ely Film Festival has been renamed to the Ely Film, Music, and Arts Festival, and we’re all excited about it!” “The Ely Film Festival was brand new in 2020,” Shadrach told me, “and last year we weren’t able to hold it in person due to Covid.”

Shadrach heard about the new mayor in Helper, Utah, named Lenise Peterman. Through hard work and support of the community that elected her, Helper recently revitalized its downtown, reclaimed languishing assets from the heydays of mining, and even restored a theater to state of the art technology.

“I saw all this in Helper, and I told Mayor Peterman, ‘I want to steal your ideas for our festival in Ely,’ and, ever the helper, she told me to go for it!” (Talk about a town with an appropriate name). Leveling Up in Ely

“I became the Chairman of the festival six months ago, and it has been a whirlwind since. Mark Bassett threw me under the bus!” Shadrach started laughing. “When I walked into a planning meeting, Mark Bassett (of the Nevada Northern Railway) immediately put forth my name as the new Chairman of the festival. I tried to object, but then he said, ‘There is a motion on the floor that needs to be voted on,’ and I got the job.” He paused, then laughed again. “They had a plan for that meeting, and I was outplayed.”

All joking aside, Shadrach jumped into planning the festival with big ideas, and is even able to draw on a homegrown celebrity for help.

“It has been an absolute delight working with the Board. They are supportive, and we have our own Hollywood connection, Dutch Marich.”

Filmmaker Dutch Marich was raised in Ruth, Nevada, and graduated from White Pine High School. He moved to L.A. to make horror movies, and he filmed his latest film, Reap Town, in Ely.

“Dutch is fantastic,” Shadrach told me. “He loves to come home and share what he knows with the community. He uses Ely in his films, and we love him as much as he loves us.” (Dutch will be attending the 2022 Festival and interacting with the community).

The first weekend of the Festival is March 11-13, and that is when the majority of the events will be happening. “We intend to do it in person, Covid allowing,” Shadrach said.

With a focus on films made in Nevada, the theme is, “Soul of Nevada,” and twelve films will be shown the first Friday through Saturday of the Festival, and it’s taking over the whole town. (Additional films from the past, all made in Nevada, will be screened through the 17th).

“We are having our first art contest, and we’re recruiting musicians for different events throughout the festival. I’m happy to say that the Shoshone Nation has agreed to participate as well. This is truly a community wide event.”

Ely Students: The Filmmakers of Tomorrow

Shadrach taught junior high school for four years, and knows a few things about kids. “I have taught over 300 students as an educator,” Shadrach said, “and one thing I know about them is that they love to express themselves.”

To that end, Shadrach is working with the school district to secure computers with software installed (like DaVinci Resolve) to allow local students to start getting into film production, and exposing them to possibilities.

Shadrach told me that the donations and sponsorships have been a boon. “Donations do wonders for a non profit like ours, and thanks to a sponsorship from Pattern Energy, we’ll be able to complete our goal of providing educational programs for the students in our community. We’re so thankful, and excited!”

“The mission is to empower the next generation,” Shadrach said, “and we will have tools available to our students to do so, and during the festival the filmmakers will make themselves available to the students as well.” 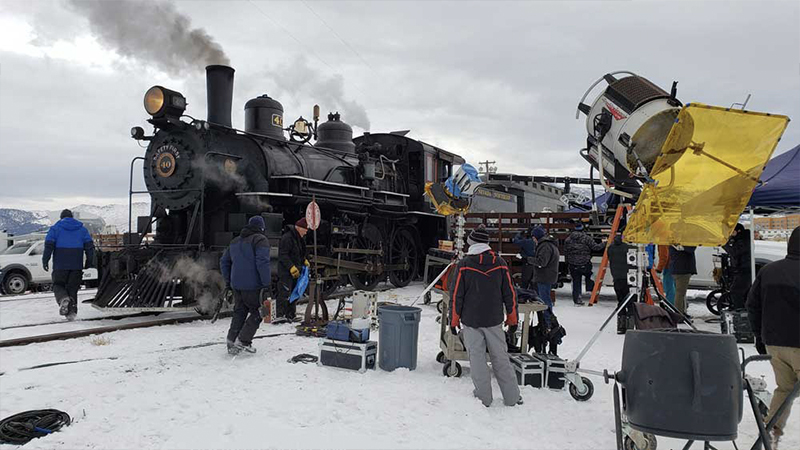 As our time together drew short, Shadrach wanted to talk about the future. He and the board of the festival plan to keep growing it year over year, and he had some thoughts as to why Ely is special, and why he is confident of success.

“Ely isn’t a WIld West town anymore,” he said. “We have over a century of cinema and art helping build and blend our cultures here. It speaks to the type of people we have in our broader community that there is so much support for the arts. Everyone-” he paused as he said it, obviously proud, “everyone is getting involved.”

He went on to tell me that there is ongoing work promoting Ely to the Nevada Film Office, and they are going to continue building programs for students in the school districts of White Pine County.